Everything You Need To Know About Good Friday 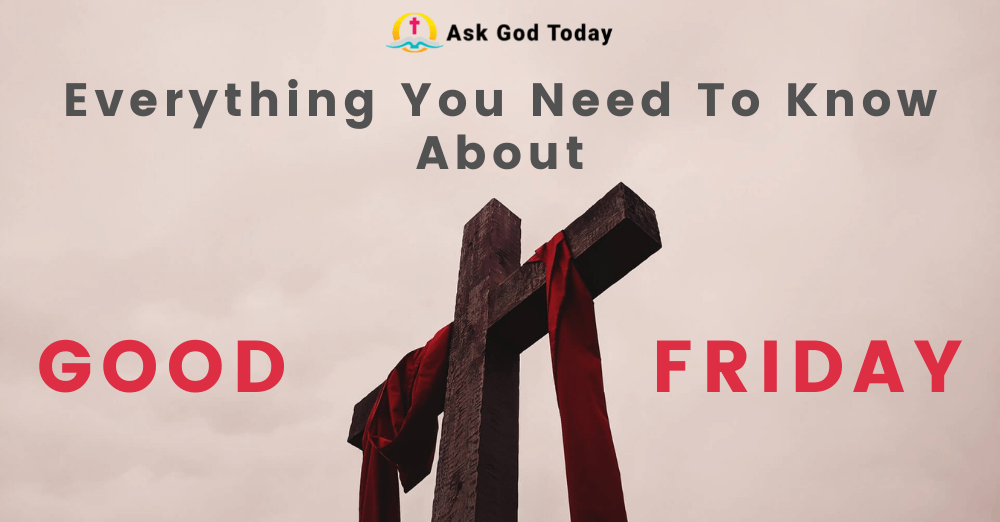 Good Friday is a term that most people are familiar with, yet many misinterpret its actual meaning. Here’s what Good Friday stands for:

Good Friday is an incredibly significant Christian holiday and the day on which we commemorate the crucifixion and death of Jesus Christ. This day of remembrance is observed by churches around the world every year while the very first Good Friday was observed in the first century, on Friday 33 A.D.

It’s known as ‘Viernes Santo’ in Spanish and it usually falls in either March or April and it reflects arguably the most important week in each calendar year for churches across the world and Christianity in general.

This holiday represents Jesus’ suffering and death as the ultimate fulfillment of God’s promise in the Scriptures that Christ would die for our sins (1 Corinthians 15:3).

And to share everything you need to know about Good Friday, in this article we’ll cover the:

Why Do We Call it Good Friday? This day is called Good Friday because, by suffering crucifixion, Jesus became the final sacrifice for mankind’s sins (Hebrews 10:14).

However, there are secular and religious theories that suggest this special holiday came from the term God’s Friday, while in Old English it was called Long Friday.

A common interpretation of Good Friday is that it comes from the obsolete sense “pious, holy” of the word “good” which’s an old-fashioned way implying that a day is regarded as truly special by the church.

Many Christians may not know that the Catholic Encyclopedia regards that Good Friday is known as “the Holy and Great Friday” in the Greek liturgy and Sorrowful Friday in German.

But for all Christians who genuinely believe in the suffering and resurrection of our Lord and Savior, Good Friday will always be called a good day because our Lord conquered sin by dying on the cross.

He paying the debt in full so that all who believe in Him should not perish but have eternal life (John 3:16).

What Happened on Good Friday? The very first Good Friday marked the culmination of the Sanhedrin’s plot (the ruling Jewish council) to end Jesus’ life after He was sentenced to death on the cross.

These events took place during the first century (around 33 A.D.) and they started what’s known as the Passion of Christ referring to the anguish that Jesus had to endure for our redemption.

Shortly after saying a prayer to His heavenly Father, Jesus was arrested and then brought to trial that was held in Jerusalem, while the final sentence was carried out by Pontius Pilate, the Roman governor of the region at the time.

Pontius Pilate had Christ flogged that represented a horrible punishment prior to being crucified and to keep the traditions, the Lord had to carry His own cross to a place where two other men (thieves) were to be crucified as well.

Jesus died after 6 brutal hours, which was considered somewhat fast as some victims could suffer for days before passing away.

This is why roman soldiers broke the legs of the 2 thieves in order to speed up their death, but since the Lord had already passed away they simply pierced His side to ensure that He’s no longer alive.

Eventually, Christ’s body was laid in the tomb of Joseph of Arimathea as opposed to being thrown in a lime pit as most victims.

What is the Meaning of Good Friday in the Bible?

The Biblical meaning of Good Friday is quite straightforward – this is the day on which Jesus, who is God in the flesh, bore the collective sins of humanity.

And here are a few great examples of verses from the Scripture that point to Good Friday:

What do Christians do on Good Friday? Christians usually gather for a church service or liturgy on Good Friday to observe the tragic events that took place on this day. More specifically, Jerusalem hosts specific religious services.

Good Friday is part of what’s known as the Holy Week that starts with commemorating the entry of God’s Son into Jerusalem, while the culmination is remembering the Last Supper on Holy or Maundy Thursday and Jesus’ passion on Good Friday.

And early Sunday is when the holiday takes a more joyful turn as the resurrection of our Lord and Savior is celebrated as part of Easter holiday services.

When is Good Friday Celebrated?

The exact date and day on which Good Friday falls are different each year, although it typically falls sometime in March or April.

But one thing remains, the Good Friday service is always done on Friday and it’s always before Easter.

It’s all About Jesus Christ’s Crucifixion and Death Every Christian should keep in mind that Good Friday much more than the holiday before Easter Sunday. It’s a reminder of how the incredible plan of God for our redemption was fulfilled so that we may live eternally by believing that Jesus died on the cross for our sins.

Only Jesus could pay the ultimate price for our sins as He is fully God and fully man, which is expressed in a very powerful way in His agonizing prayer in the Garden of Gethsemane.

So next time you celebrate Good Friday and Easter, think about what Jesus really did on the cross for you and for all mankind.

All that you have to do to be saved and have everlasting life is to believe in the Lord Jesus (Acts 16:3).